The Victs rig came equipped with a potent 100 Mhz Pentium processor and future-proof ASUS Socket 7 motherboard but little else to support our high-end 1995 gaming and multimedia needs. In this article I'm going to explain the reasoning behind my component selection for graphics and sound which will hopefully be of use to those trying to build similar, period-correct machines. 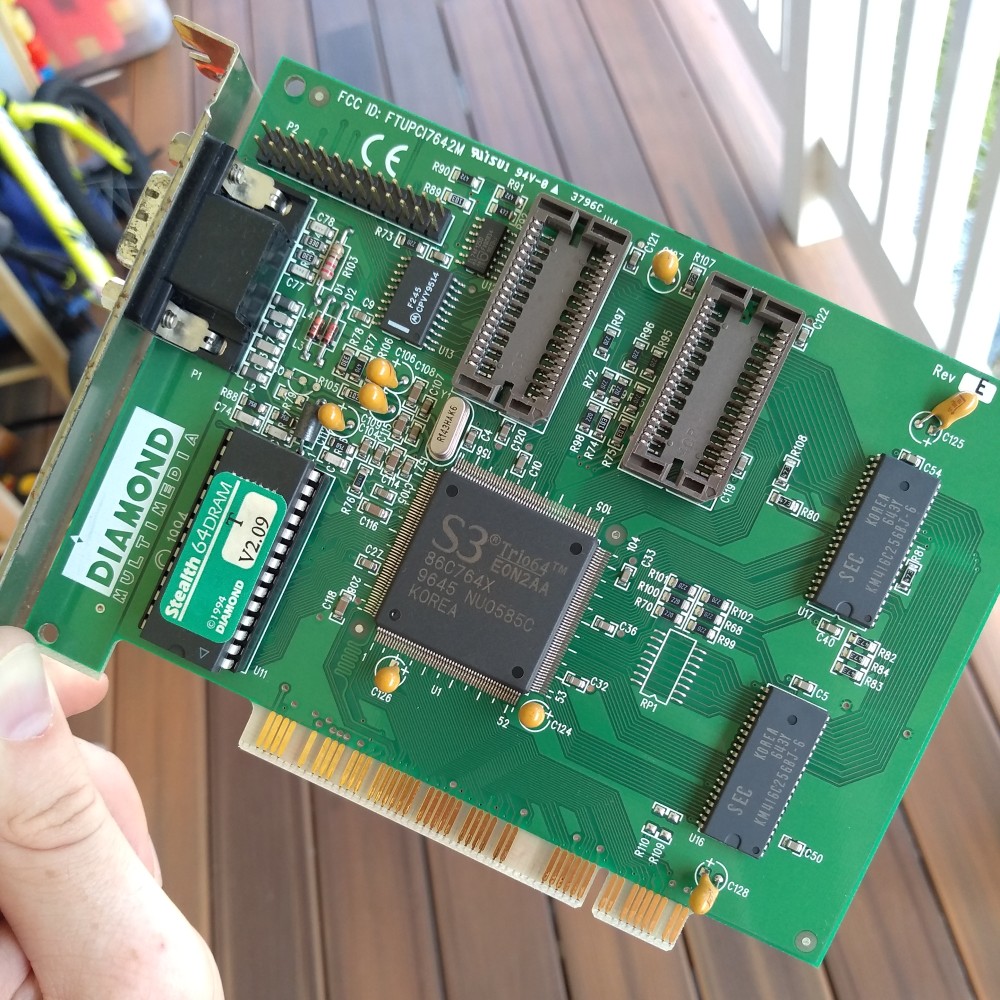 At first blush, the Diamond Stealth 64T DRAM that I found installed in the machine seemed perfect for this build. The card debuted in 1995 as a cost-reduced version of Diamond's S3 Vision864-based GUI/CAD accelerators and features S3's venerable Trio64, a chip beloved by the DOS gaming community for its exceptional performance and compatibility. Due to its aggressive pricing and Diamond's close relationship with PC builders, this was the card that introduced 64-bit graphics to the masses. My initial excitement for the card faded, however, when I realized that, with its additional RAM sockets unpopulated, it was only using a 32-bit memory interface, negating much of the performance advantage. Additionally, comparing its output side-by-side with contemporary cards with discrete RAMDACs, the colors were undeniably muted. 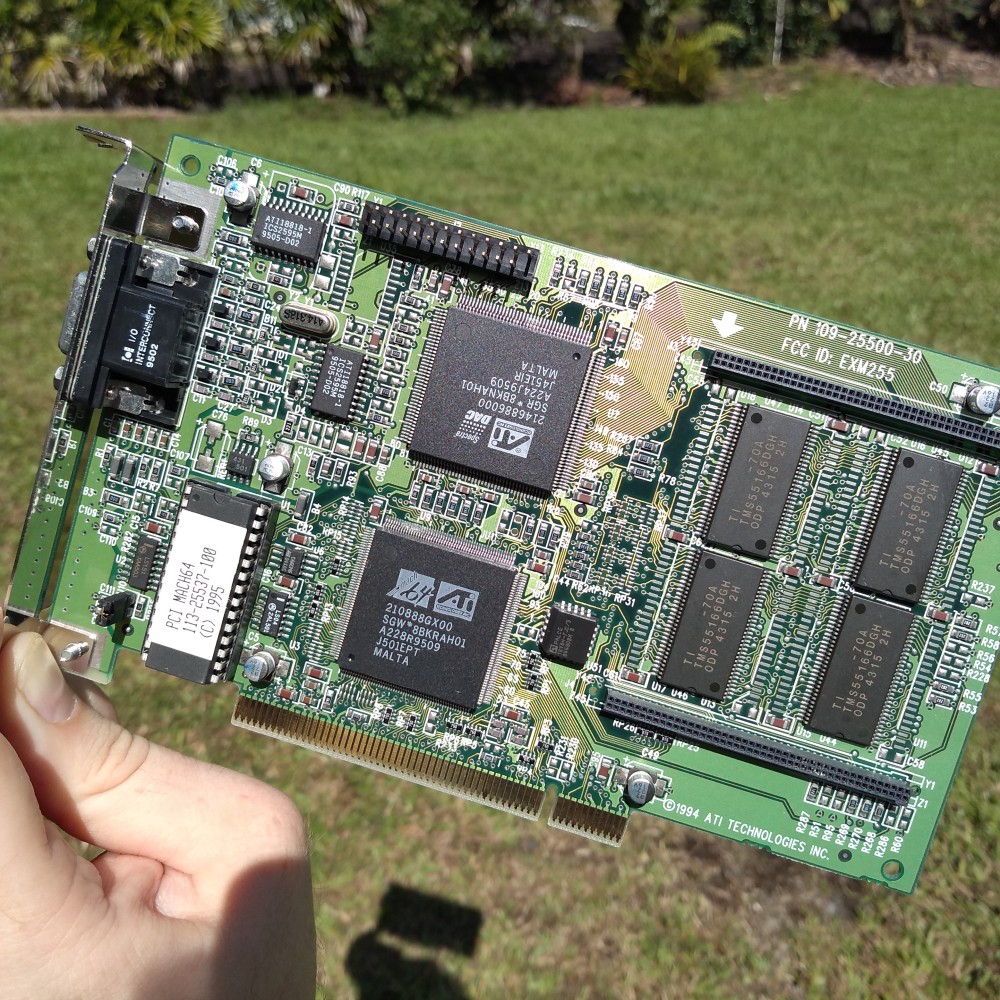 Not completely satisfied with the Stealth 64, I auditioned two other cards I had lying around - an ATi Graphics Pro Turbo and a Matrox Millennium. As seen in my benchmarks, Graphics Pro Turbo's mach64 GX was outgunned by the Trio64, even with a huge memory bandwidth advantage. However, the output from the RAMDAC was clean and bright, the performance gap at SVGA resolutions was negligable and compatibility, at least with VGA titles, was perfect. I used it to play through both Dark Forces and TIE Fighter and was completely happy with it until I started another round of benchmarking. 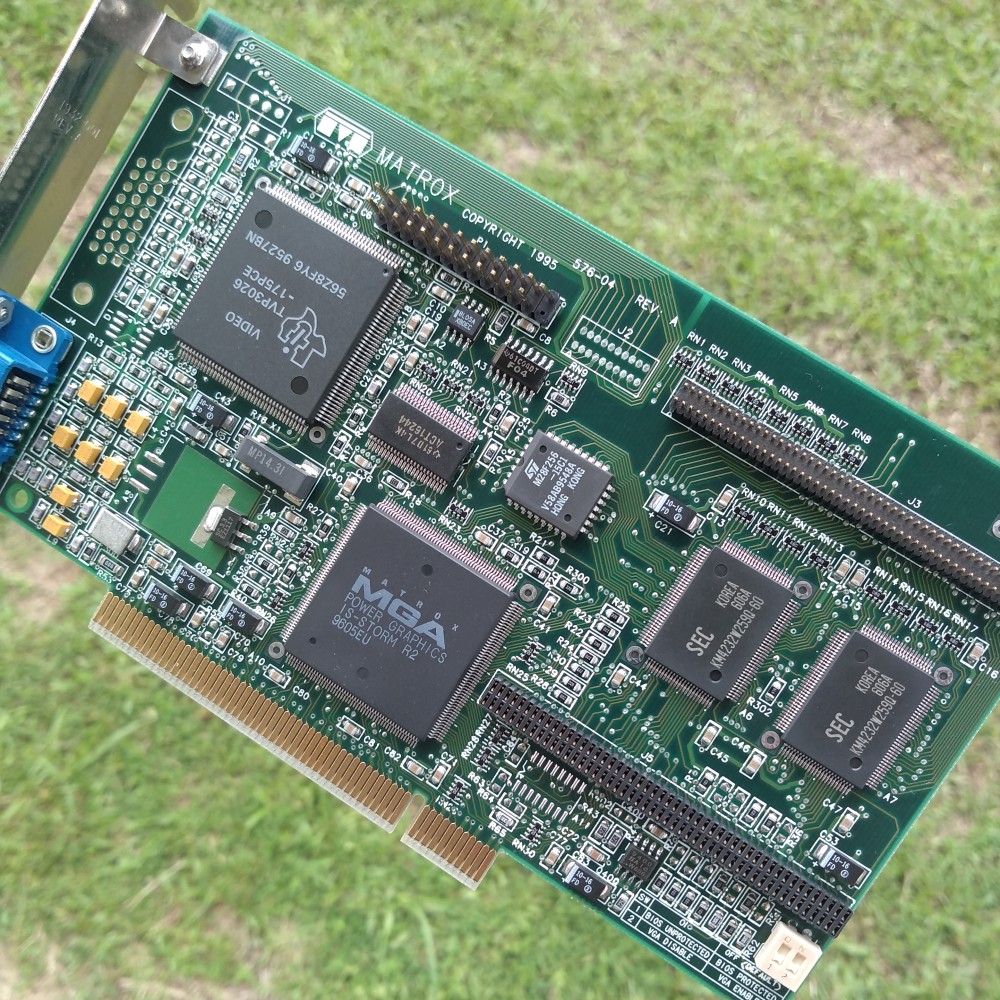 The most recent occupant of PCI Slot 1 is my Matrox Millennium. With its fast, exotic Window RAM and high-quality DAC, it certainly lives up to its reputation as a no compromises 2D card for both Windows and DOS. My testing showed it to be significantly faster than the mach64 and Trio64 in games, especially at SVGA resolutions. Although I've been warned of screen tearing issues in scrolling games such as Command & Conquer, I've been thus far impressed with its compatibility, especially following an upgrade to the latest v3.0 BIOS. It's hard not to recommend the Millennium, especially given its continued availability and affordability on auction sites.

Growing up, I was fortunate enough to have owned not one but two exceptionally good ISA sound cards. My 386SX-20 was blessed with an honest-to-goodness Sound Blaster Pro 2.0 and the snarling, Pentium 120-based Gateway 2000 desktop that arrived just beforce Christmas in 1995 came equipped with an early ViBRA 16 board that retained an authentic Yamaha FM chip. In my childhood bubble, all sound cards were crisp and compatible, and all synth was richly textured Yamaha OPL. When I hit eBay to find a suitable card for my 1995 rig, I was mystified to discover that certain Sound Blaster cards were cherished antiques fetching enormous prices while others, their model numbers just a digit or two off, were considered utter dreck, toxic assets unwanted at any price. Rather than sell off my redundant organs to finance repurchasing the iconic cards of my youth, I decided to research suitable, budget-oriented options. Thus did I fall into the gaping rabbit that is ISA sound. 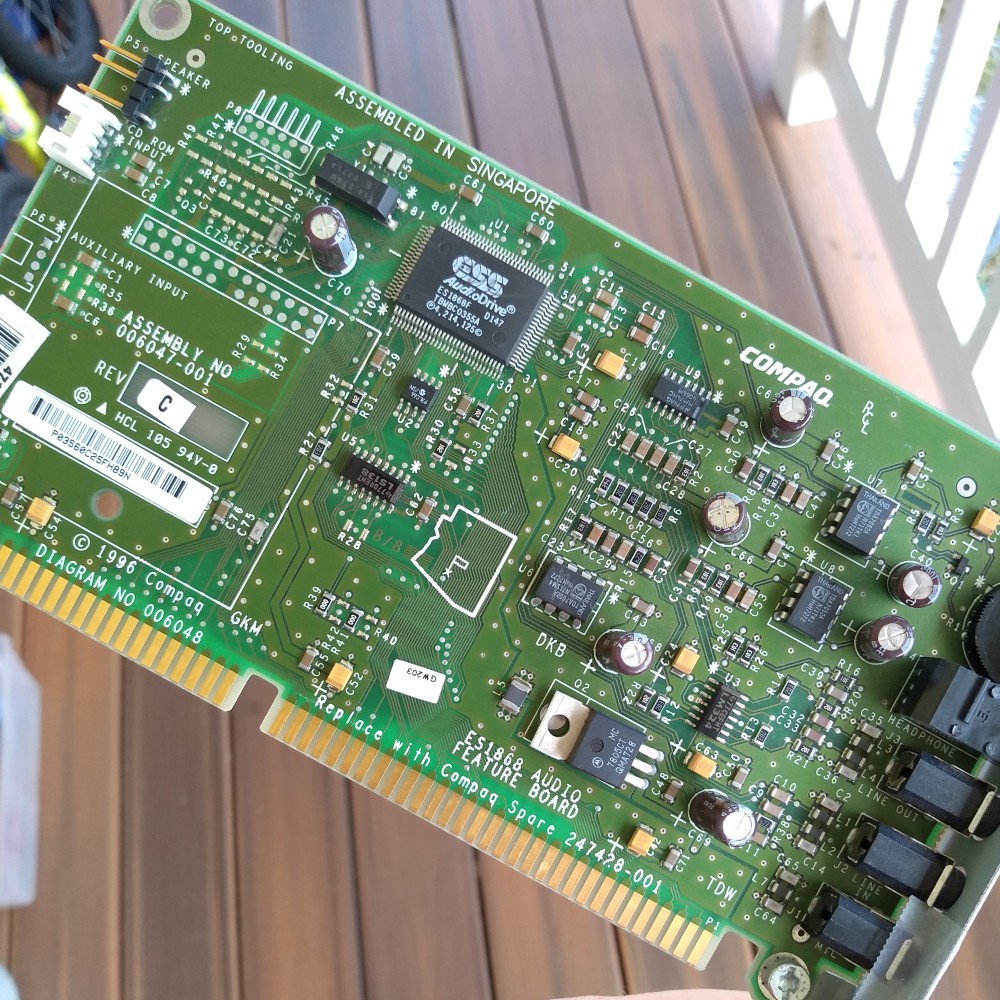 Creative Labs made a dozen or more Sound Blaster models - Pro, Pro 2.0, 16, ViBRA, 32, AWE32, AWE64, etc. - and for each of those there are a dozen or more revisions each with their own strenghts and weaknesses. Sound Blaster 16 cards were ubiquitous in 1995 and at first seemed an obvious choice for my build, but most revisions are derided for their noisy output and poor compatibility with games targeting earlier models. On later boards, Creative substitued their own FM synthesis chip for Yamaha's distinctive OPL, a change viewed by many in the retro PC community as the Sound Blaster's death knell. As overwhelming as Creative's line-up is, when it comes to clones of their venerable designs, the variety is practically endless. Dozens of manufacturers put out cards based on hundreds of chips from the likes of AZTECH, OPTi, ESS, CRYSTAL, Yamaha and Ensoniq. Desperate for advice, I turned to my backlog of old Phil's Computer Lab videos. The first one I watched endorsed the rather austere-looking ESS AudioDrive 1868F, a highly-integrated 16-bit solution.

Phil was impressed by its excellent Sound Blaster Pro compatibilty, clean playback, and straightforward, TSR-less software. The FM, while not authentic Yamaha OPL, was no less rich and nuanced and the subtle differences in reproduction conferred a unique character rather than simply sounding glitchy. Best of all, I discovered that OEM versions of the board could be found on eBay for less than $25. I hit 'Buy it Now' and have yet to regret it. The card is everything it's cracked up to be, sounding absolutely delightful in everything I've thrown at it without the slightest bit of fussiness. All the game music in our podcast has been recorded from its Line Out so you can judge for yourself how it stacks up against more presigious options.

All the Other Bits 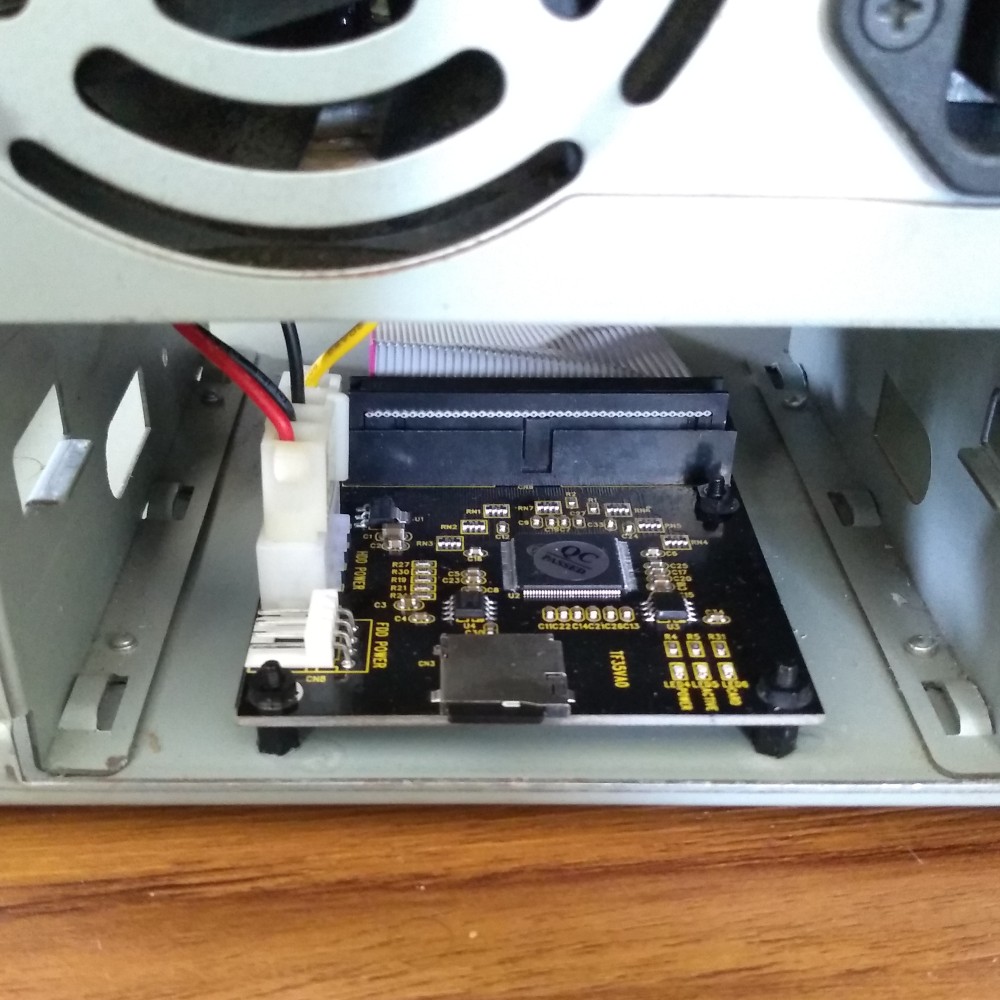 The Victs rig didn't include an CD-ROM drive and its original, 1GB hard disk only had another 15 minutes of life left in it. I only had a single beige optical drive in my junk drawer, a Ricoh model with the requisite IDE interface and analog CD audio output header, as well as completely unnecessary DVD+RW capability. I decided to go solid-state for the hard disk replacement, using a cheap IDE microSD adapter from Amazon and off-brand 8GB card that have, thus far, functioned flawlessly.

In the next installment of This Old Victs I'll cover the software configuration and share a few tips for less-frustrating DOS and Windows 3.1 gaming. 'Til then!

Stay tuned for information on how you can support our blog and podcast.